On April 27 1985, Madonna’s Angel single was briefly reviewed in Billboard magazine as it entered the Hot 100 at #48.

The Angel 12-inch single, which included an extended dance mix of the track – plus Into The Groove on the b-side – would be issued commercially in North America in late May.

Like Loading...
March 16, 2019 By Jay in 1995, March Tags: Angel, Causing A Commotion, Dress You Up, Holiday, Like A Prayer (Single), Like A Virgin (Single), Stephen Thomas Erlewine, The Immaculate Collection, True Blue (Single), Vogue, Who's That Girl (Single) 2 Comments 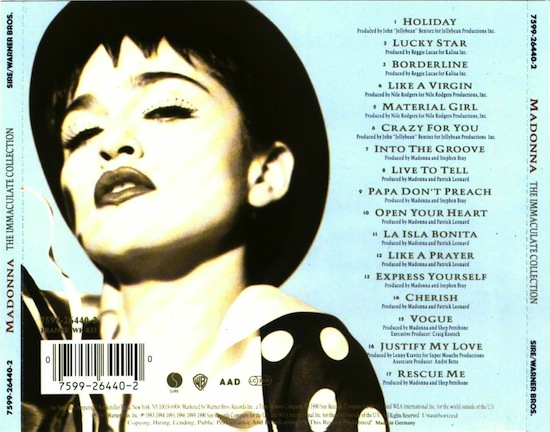 On March 16 1995, Madonna’s The Immaculate Collection was certified 6x platinum (6 million units) in the USA.

On the surface, the single-disc hits compilation The Immaculate Collection appears to be a definitive retrospective of Madonna’s heyday in the ’80s. After all, it features 17 of Madonna’s greatest hits, from Holiday and Like a Virgin to Like a Prayer and Vogue. However, looks can be deceiving. It’s true that The Immaculate Collection contains the bulk of Madonna’s hits, but there are several big hits that aren’t present, including Angel, Dress You Up, True Blue, Who’s That Girl and Causing a Commotion. The songs that are included are frequently altered. Everything on the collection is remastered in Q-sound, which gives an exaggerated sense of stereo separation that often distorts the original intent of the recordings. Furthermore, several songs are faster than their original versions and some are faded out earlier than either their single or album versions, while others are segued together. In other words, while all the hits are present, they’re simply not in their correct versions. Nevertheless, The Immaculate Collection remains a necessary purchase, because it captures everything Madonna is about and it proves that she was one of the finest singles artists of the ’80s. Until the original single versions are compiled on another album, The Immaculate Collection is the closest thing to a definitive retrospective. 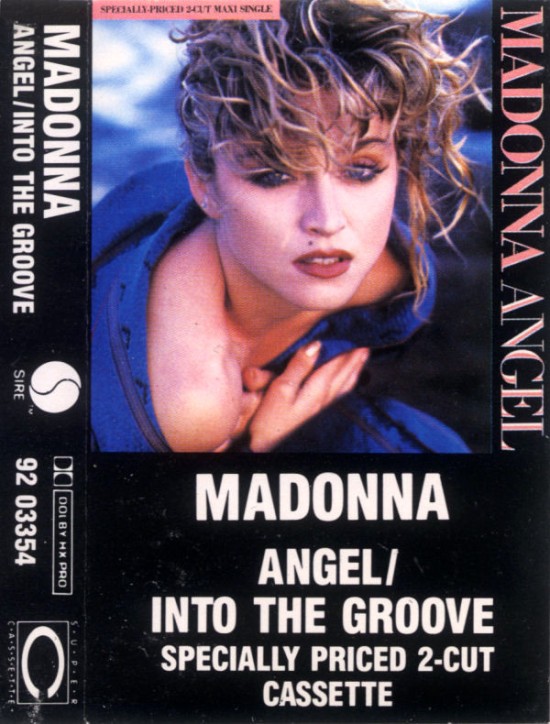 Angel was written by Madonna and Stephen Bray and produced by Nile Rodgers for the Like A Virgin album. 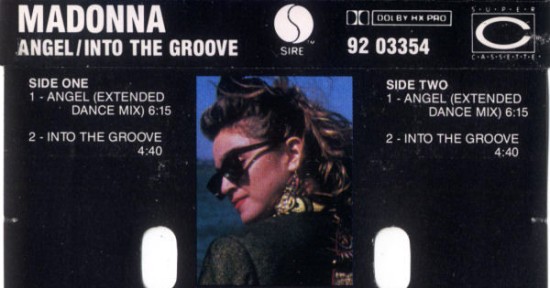 Mainly driven by the popularity of Into The Groove (which was available exclusively on the Angel maxi-single in North America) with its heavy rotation on MTV, in clubs and its prominent appearance in the hit film Desperately Seeking Susan, the release would spend a total of twelve weeks in the top-5 of the Hot Maxi-Single Sales chart, including seven non-consecutive weeks at #1. Being a niche format that rarely generated enough mainstream interest to earn certification-level sales, Angel/Into The Groove has the distinction of being only the fourth maxi-single in history be certified Gold in the U.S.

In Canada, interest in Into The Groove prompted Warner Music Canada to issue Madonna’s first North American cassette maxi-single in addition to the standard 12 inch vinyl. The experiment clearly proved successful, as Warner Music Canada would continue to offer her subsequent releases in both formats several years before the U.S. followed suit.

On June 1 1985, Warner Bros. and Sire Records took out a centerfold ad in Billboard magazine to celebrate the resounding success of Madonna’s first concert trek, The Virgin Tour.

Featuring the cover image from her current hit single Angel as its backdrop, the spread cheekily alluded to Madonna’s “virgin” moniker with its caption:

“You were wonderful! We’re proud of you. Congratulations on your first tour.
– Warner Bros. and Sire Records.”

Not wanting to draw more attention away from the Like A Virgin album following the release of the soundtrack hit Crazy For You, Sire/Warner notoriously relegated Into The Groove to the b-side of the Angel 12″ single in North America & Australia, although they eventually ceded to issuing it as an A-side in most other international territories.

Into The Groove was written & produced by Madonna & Stephen Bray and was their first released co-production to not be reworked by an outside producer (the pair had already been producing their own demos for years). The original demo version was used over the closing credits of Desperately Seeking Susan (seemingly dubbed from an actual cassette copy of the demo–granted, DAT’s were still a few years away), and although the commercially released mix featured a slightly beefed-up and more polished-sounding musical backing track, it kept Madonna’s original demo vocals intact.

In the UK, and throughout most of Europe, the single was backed by the Madonna-penned ballad Shoo-Bee-Doo, while the original album version of Everybody (another song credited to her alone) rounded out the 12″ single…it would be fair to assume that Madonna likely earned some of the biggest single-generated songwriting royalty cheques of her career thus far with this release. It’s interesting to note that despite being one of Madonna’s most enduring dance floor classics, no remixes were produced for Into The Groove at the time of its release. It wasn’t until 1987’s You Can Dance remix compilation that the song finally received an official extended remix treatment.