On July 7 1984, Warner Bros. Records took out a full-page ad in Billboard magazine to congratulate Madonna on the Gold certification of her self-titled debut album.

The ad featured the first look at a new photo shoot Madonna had recently completed with Steven Meisel. This image would later appear on the back cover of her next album, Like A Virgin. 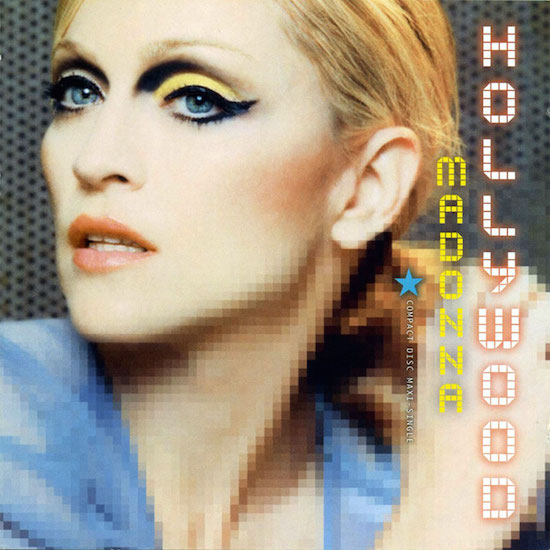 On June 17 2003, the single cover for Madonna’s Hollywood single was revealed. The photo was taken from the photo shoot by Steven Klein for W Magazine.

Hollywood was the second single from the American Life album, released on July 14, 2003.

In April 2003, in an interview with Q Magazine, Madonna described the allure life in Hollywood:

“I’ve had 20 years of fame and fortune, and I feel that I have a right to an opinion on what it is and what it isn’t. All everyone is obsessed about at the moment is being a celebrity. I’m saying that’s bullshit and who knows better than me? Before it happens you have all kinds of notions about how wonderful celebrity is and how much joy it’s going to bring you. Then you arrive … Look like this you’re gonna be happy. Drive this car you’re gonna be popular. Wear these clothes and people are gonna wanna fuck you. It’s a very powerful illusion and people are caught up in it, including myself. Or I was.”

On January 12 1995, Madonna appeared on the cover of Germany’s Stern magazine. The cover image was taken from the upcoming Spring/Summer Versace campaign. Photo by Steven Meisel.

Here are some of the other books that made the chart that week: 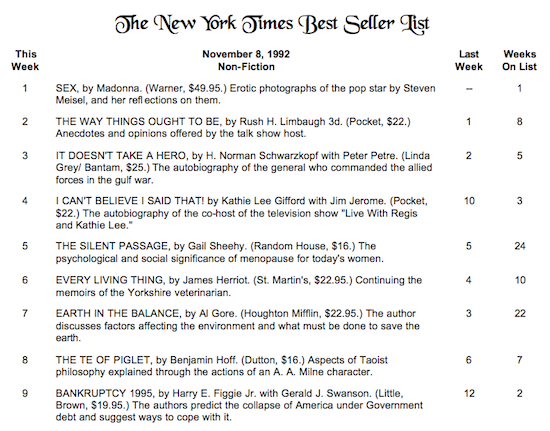 The 128-page coffee table book of erotica and sexual fantasies was written by Madonna, with photographs taken by Steven Meisel and film frames shot by Fabien Baron.  The book was edited by Glenn O’Brien.

How old were you when you first bought or read through Madonna’s Sex book?

On October 15 1992, Madonna threw a Sex book pre-release party at New York City’s Industria Super Studio, and signed all the invitations under her alter ego “Dita”.

During the party, Madonna showed up dressed as Little Bo Peep and carried with her a stuffed toy lamb.

Both Walden Books and Barnes & Noble prepared corporate statements that their store managers could share with customers who were offended by Sex. Both statements defended the right of bookstores to provide “diversity and choice” to customers and say censorship is not the role of bookstores.

Bookstore owner David Epstein stated that “The feeling of most people who have ordered the book is that Madonna is something special, that this is cutting-edge art, they’re not the kind of people who are buying it because it’s smut and dirty pictures. People are interested in it as art.”