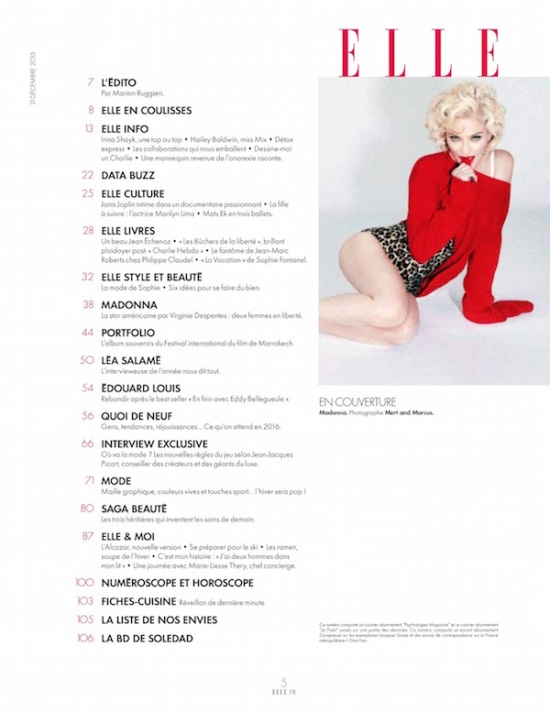 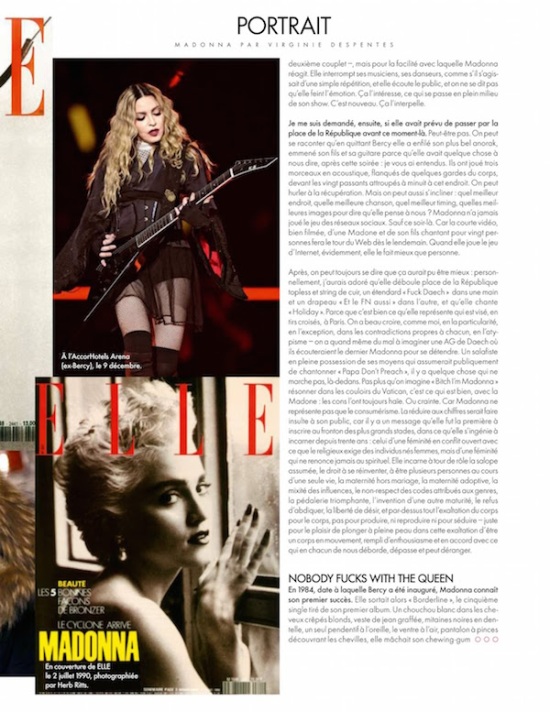 On December 31 2015, Madonna was featured on the cover of Elle France magazine.

Here’s a snippet of the article inside (translated):

“Morons have always hated her. Or loathed her. For Madonna is not only consumerism. It would be an insult to Madonna fans to speak of her only in terms of figures. Because she was the first to deliver this message to such big crowds, and still does after 30 years: that her femininity is openly in conflict with what religions demand from female individuals, yet her femininity never ceases to be spiritual.” 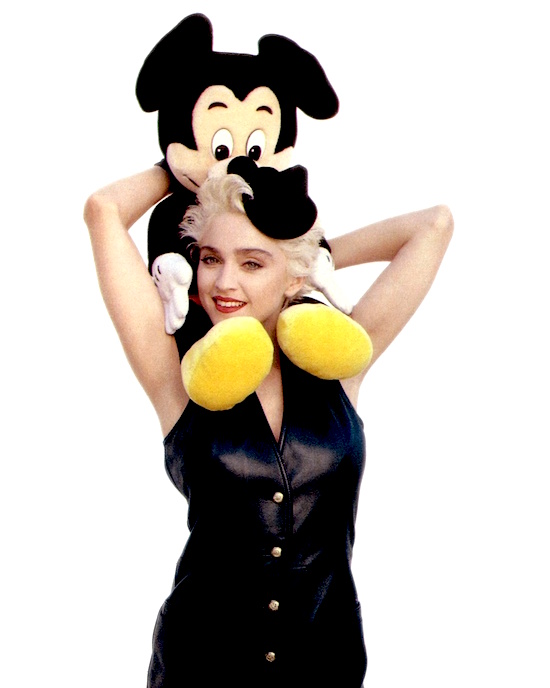 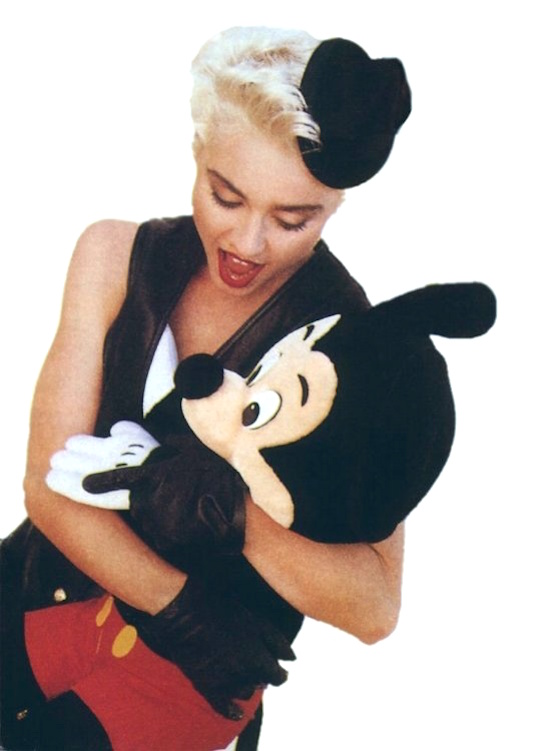 On December 30 1987, Madonna was featured on the cover of Smash Hits magazine. Before the Pet Shop Boys became famous, Neil Tennant interviewed Madonna for Smash Hits:

Neil Tennant: Where are you from?

Madonna: I come from a big Italian family. I have eight brothers and sisters. I was born in Detroit and then moved to Pontiac and then moved to another city just north of Detroit. Those are all car factory cities so everybody’s families worked in the car factories. I went to three different Catholic schools – uniforms and nuns hitting you over the head with staplers, very strict and regimented. To my superiors I seemed like a very good girl. I was very good at getting into these situations where I was the hall monitor and I reported people who weren’t behaving. And I used to torture people but in the end it came back to me. 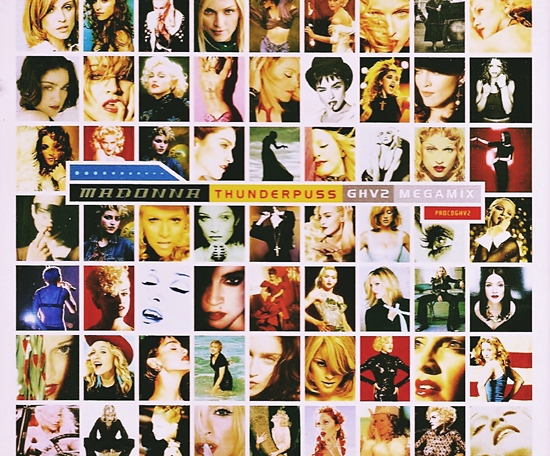 On December 29 2001, megamixes issued to promote Madonna’s second greatest hits collection, GHV2, made their debut on Billboard’s Hot Dance Music/Club Play chart in the U.S. at #29.

An additional marketing push to club DJ’s came in the form of GHV2 Remixed: The Best of 1991-2001 – a promo-only companion collection issued on CD and vinyl that compiled full-length remixed versions of songs featured on GHV2.

Like Loading...
December 28, 2018 By Jay in 1992, December Tags: 25 Most Intriguing People, A League Of Their Own, Body Of Evidence, Erotica (Single), People Magazine, Sex, The Sex Book, This Used To Be My Playground 1 Comment

On December 28 1992, Madonna was named one of the 25 Most Intriguing People In The World For 1992 by People magazine.

Here’s what People had to say about Madonna in 1992:

The Movies! The Album! The Naughty Pictures! Once Again Madonna Was Everywhere, Shouting, “Look at Me—Every Inch of Me!”

Intriguing: suggests an air of mystery. Madonna: does everything in public but floss her teeth.

OK—so what’s so intriguing about somebody who lets you know that her lovers require a five-cent deposit?

For one thing, she made ya look. Consider Sex, the photo book in which she had her picture taken doing everything but blushing. Besides proving that a naked Madonna could arch backward over a pinball machine without mussing her hair, it also pushed the envelope out to the size of a circus tent. And when the crowds came pouring in, there she was at center ring, cracking her whip.

It only served her purposes that Sex earned sniffy reviews like “The Empress Has No Clothes” and that it was banned in places such as Japan and Ireland. Coming on the heels of her summer film hit, A League of Their Own, the fuss over her book helped to launch her new album, Erotica, and primed the movie audience for her next assault on their sensibilities, Body of Evidence. Her success at getting the world to subsidize her sexual preoccupations—to say nothing of her mammoth self-absorption—is what makes her worth the $60 million deal she cut this year with Time Warner (the parent company of PEOPLE). Madonna is not the first star to find the bucks in buck nakedness. But no one before her has capitalized so well on human willingness to have our fears and desires repackaged and sold back to us.

Yet this most public of women still strains to be a mystery. This year she went through more faces than Lon Chaney—one minute in Baby Jane pigtails, a cupcake from hell; the next in sour milkmaid gear, Heidi with a mean streak. Her changing gallery of faces is one reason that she’s a sex symbol who inspires a lot of heavy breathing from intellectuals. One landmark of the 1992 publishing list—The Madonna Connection: Representational Politics, Sub-cultural Identities and Cultural Theory. You didn’t get this sort of thing for Petula Clark.

But does she really throw such a mysterious light on our culture? More likely it’s just the glinting gears of a giant publicity machine. Yet the sheer magnitude of her achievement in that regard is, well, intriguing. And the grinding of those gears is surely too loud to be ignored. “I’m a revolutionary,” she once sighed. “And yes. it’s a burden.”

Sometimes it’s a burden for her, we sigh in return, and sometimes for us.

Madonna was a busy woman in 1992! What did you enjoy most? A League Of Their Own? This Used To Be My Playground? Erotica? Sex? Body Of Evidence?

On December 27 1986, RPM magazine published their list of the top charting singles of 1986 in Canada.

Here’s how Madonna’s singles stacked up in the year-end ranking:

A stark departure from her earlier pop hits, Live To Tell was initially considered by her record label to be a risky choice for a single. Its success showed that programmers were willing to give Madonna some room to grow on radio. 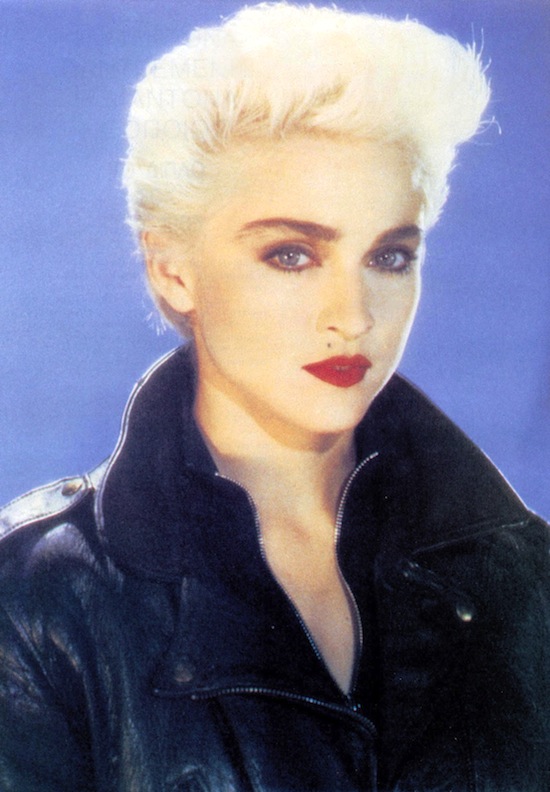 What was your favourite Madonna single release from 1987? La Isla Bonita, Who’s That Girl, Causing A Commotion or The Look of Love?

On December 25 1982, Madonna’s Everybody debuted at #9 on Billboard’s Bubbling Under Hot 100 Singles chart in the USA.

Madonna recalls the first time she heard Everybody on the radio:

“I was living on the Upper West Side, 99th and Riverside, and about 7:00 at night I had the radio on in my bedroom, on WKTU, and I heard ‘Everybody’. I said ‘Oh, my God, that’s me coming out of that box.’ It was an amazing feeling.”