On June 26 2013, upon hearing the Supreme Court’s rulings on DOMA and Prop 8, Madonna made this statement:

“What a way to start my day!!  I’m wearing a smile from ear to ear. There is a G-D! Justice is served. Hallelujah!!”

On June 6 2013, a press release by Universal Music announced the release date of the MDNA World Tour concert film and live album:

Madonna’s groundbreaking, critically acclaimed, controversial and visually stunning MDNA concert will be available in the US on August 27th (August 26th globally), it was announced today by Universal Music. The two hour MDNA extravaganza was the most successful tour of 2012. Presented by Live Nation Global Touring, the tour included 88 sold out shows in 29 countries. Madonna and her ten member band lead by musical director Kevin Antunes and troupe of 25 dancers performed a wild two hour spectacle that fascinated, enthralled and entertained 2.2 million fans.

“Madonna spent six months personally editing the video footage from 30 cameras and many different shows to put together the MDNA DVD. Her attention to every frame, every detail and nuance and total commitment to show her creative vision has been done to perfection. Each song is like a short movie. One minute you are in an action movie and the next you’re at a golden era musical before shooting across to India and back for a house party to finish. It’s better than any 3-D Imax movie out there and at a break neck pace that would make any Olympian struggle for breath,” commented the show’s co- director and supervising editor, Danny B. Tull.

Songs included “Girl Gone Wild” and “Gang Bang” from Madonna’s MDNA CD which debuted at No. 1 in 35 countries as well as fan favorite classic Madonna songs such as “Hung Up”, “Express Yourself,” “Vogue,” “Open Your Heart,” “Like A Prayer” and “Celebration”.

“My show is a journey.. the journey of a soul from darkness to light. It is part cinematic musical theatre, part spectacle and sometimes intimate performance art. I know people can relate to it. It’s very important to me as an artist that my show not be taken out of context. It must be watched with an open heart from beginning to end.. I am sure if it is viewed this way, the viewer will walk away feeling inspired, invigorated and will want to make the world a better place.. And this of course is my intention,” remarked Madonna in her manifesto about the show.

Amongst the glowing reviews, the Daily Mail raved, “The queen of pop’s latest album MDNA provided the bedrock for a two hour show that sent out a powerful message to any young pretenders eyeing up her crown.. She remains one of the greats.”

“Madonna’s sold-out concert was a jaw-dropping sequence of stunningly designed set pieces; including an aerial drum crops, a battalion of dazzling dancers, an explosively bloody gangster fantasy and a surreal spiritual voyage,” remarked The Miami Herald.

“The Material Girl proceeds to take us through a song cycle that examined sex, liberation, sin , empowerment, love, addiction, rebellion and finally redemption.. She did it all in classic Madonna style – controversial and eye-popping,” commented The Dallas Morning News.

The MDNA DVD was directed by Danny B. Tull and Stephane Sennour and was produced by Madonna. Executive producers: Arthur Fogel, Guy Oseary and Sara Zambreno. Tour wardrobe was created by Arianne Phillips. Supervising Editor Danny B. Tull. Director of Photography Mark Ritchie. 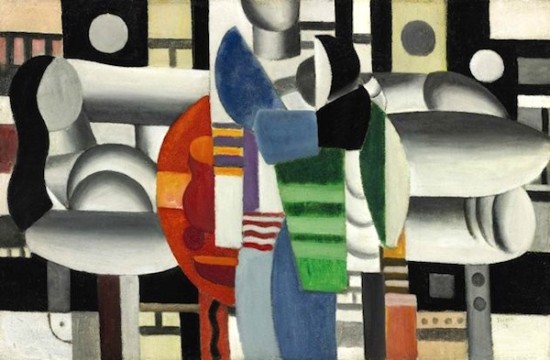 On May 8 2013, Madonna donated her original painting of Fernand Léger’s Trois Femmes à la Table Rouge to Sotheby’s Impressionist and Modern Art Auction.  The painting from 1921 was estimated to be worth $5-7 million. It sold for $7.2 million, with proceeds benefiting Madonna’s Ray Of Light Foundation, supporting girl’s education projects in the Middle East and South Asia.

The painting had been in Madonna’s collection since 1990.  Here’s what she had to say about the fantastic sale:

“I am thrilled that my painting sold at Sotheby’s above and beyond expectations! I’m eternally grateful to the anonymous collector who bought it – as will every girl who will have a chance to go to school because of their generosity. Thank you. Thank You. Thank you!” 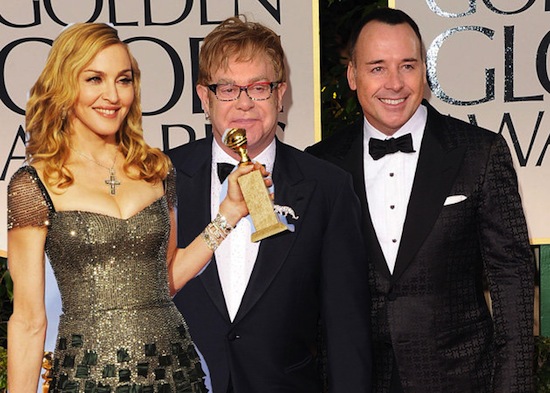 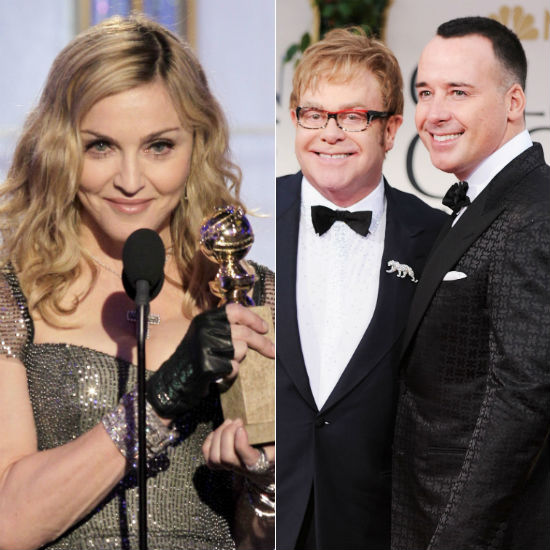 On April 28, 2013, Sir Elton John told Extra that his decade-long feud with Madonna had ended.

“We were in a restaurant in France in the summertime,” he explained. “She came in, and I sent over a note. She was very gracious. I apologized profusely because what I said should never have appeared in public.”

Their altercation began in 2002 when John had choice words over Madonna’s song for the James Bond Die Another Day film. He remarked that it was “the worst Bond tune ever.”

If that weren’t enough, the “Candle in the Wind” singer accused Madonna of lip syncing during her Re-Invention Tour in 2004 and deepened that speculation when he said, “Make sure you lip-sync good” before her Super Bowl performance.

Even John’s husband David Furnish insulted the Queen of Pop when he said “I like Madonna’s music, but not her movies,” while attending the 2012 Golden Globe Awards. Even more, Furnish said “she should stick to what she is good at,” when Madonna beat John for the Best Original Song (Masterpiece).

Now the couple’s attempt to extinguish the drama seems to have been well received by M.

“She accepted our apology, and then we bought her dinner,” John said. “That’s over and done with. She was fantastic. She was just like, ‘Okay, let’s get a move on.’”

Furnish added, “We don’t believe in putting negativity out in the world, both of us were embarrassed when all that stuff came out. But you’ve got to put all that behind you and just go forward with the positivity.” 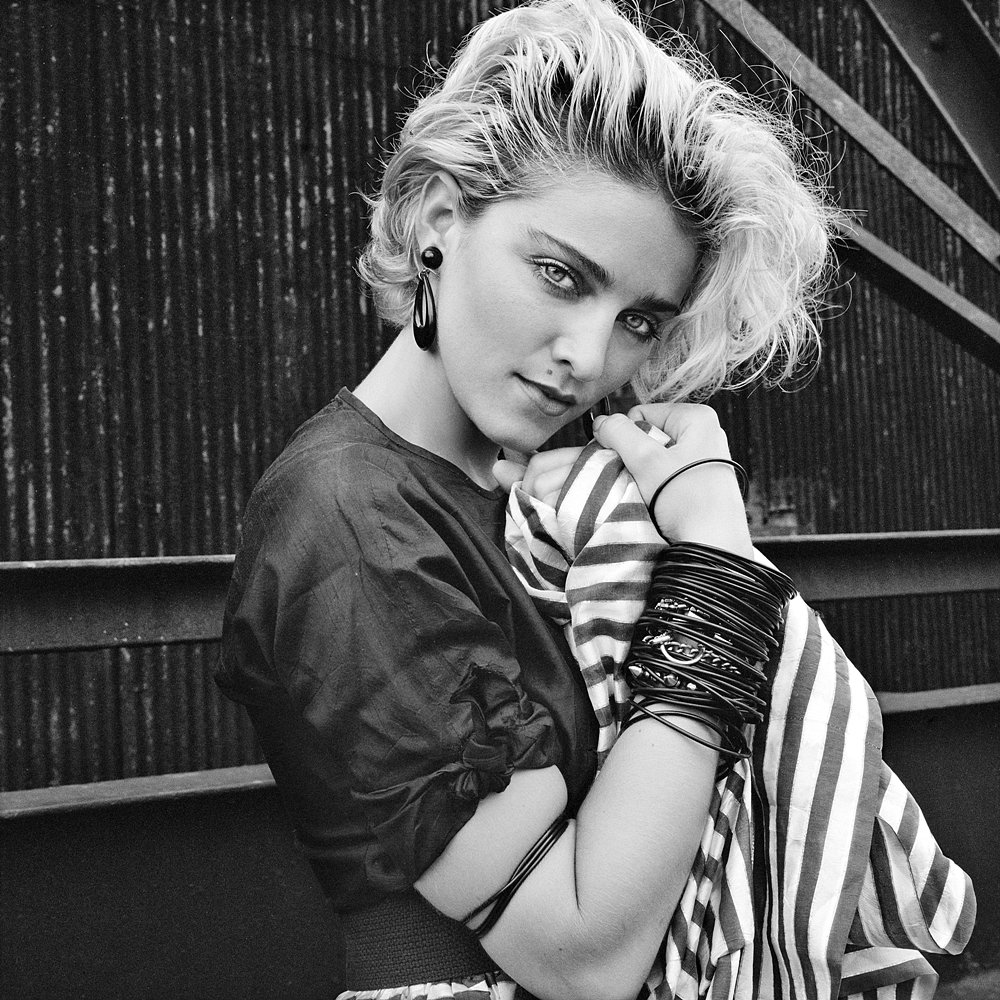 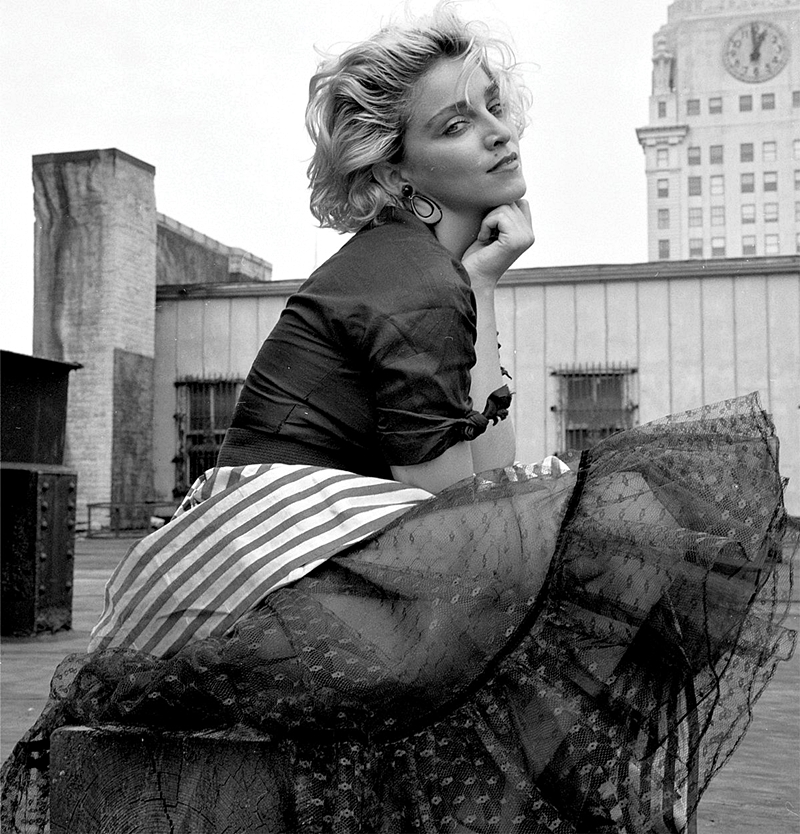 On October 29 2013, photographer Richard Corman announced the release of an exclusive photographic book, Madonna NYC 83, devoted to the photo shoot he created with Madonna back in 1983, a few months before the release of her first studio album.

“As a young photographer in 1983, I had the opportunity to capture a series of images with Madonna as she was on the verge of releasing her debut album,” said Richard Corman. “The rebellious energy of the East Village was the backdrop to showcase Madonna’s style, spontaneity and pioneering attitude. She consistently conveyed an attitude of fearlessness and fierce determination.” 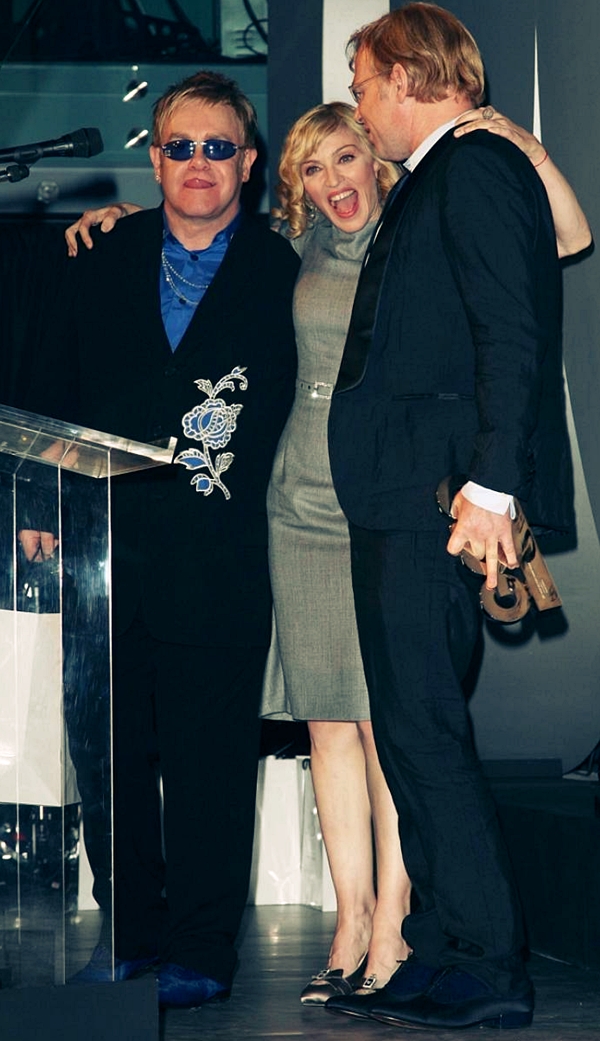 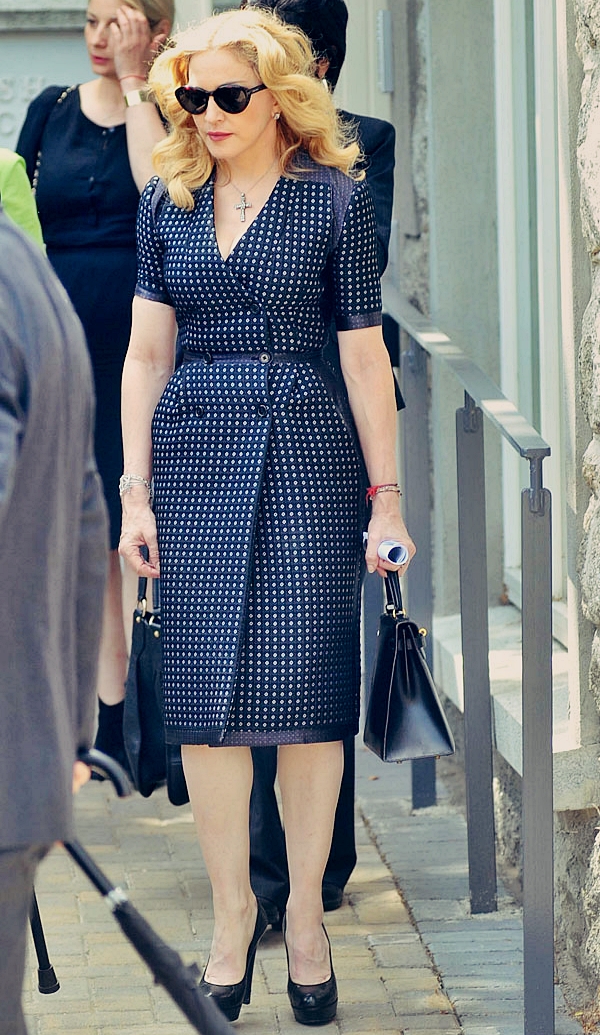 On July 23 2013, Madonna attended the funeral of her close friend David Collins in Monkstown, Ireland.

Madonna had initially met Collins in 1995 while she was in London to record the soundtrack for Evita. Well-known for his work as an architect and interior designer, Collins also received a songwriting credit on Drowned World/Substitute For Love when Madonna chose to adapt elements of a poem he had written for her into the song’s lyrics. 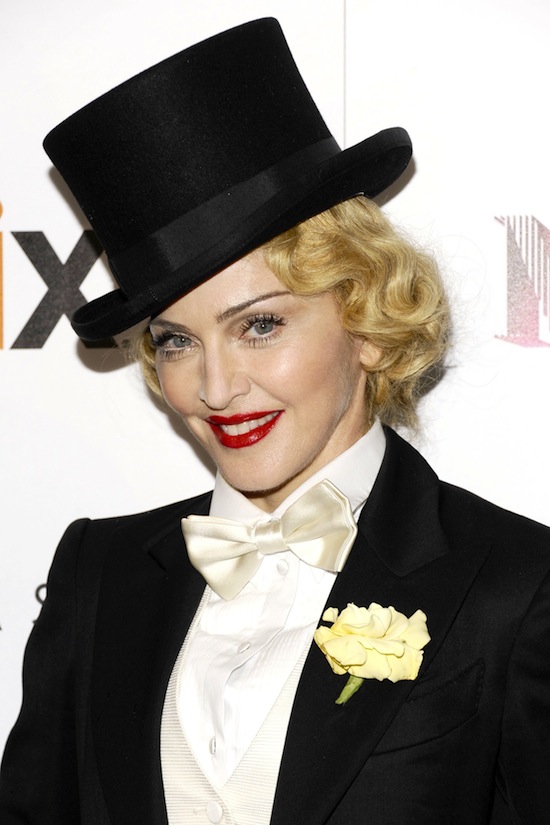 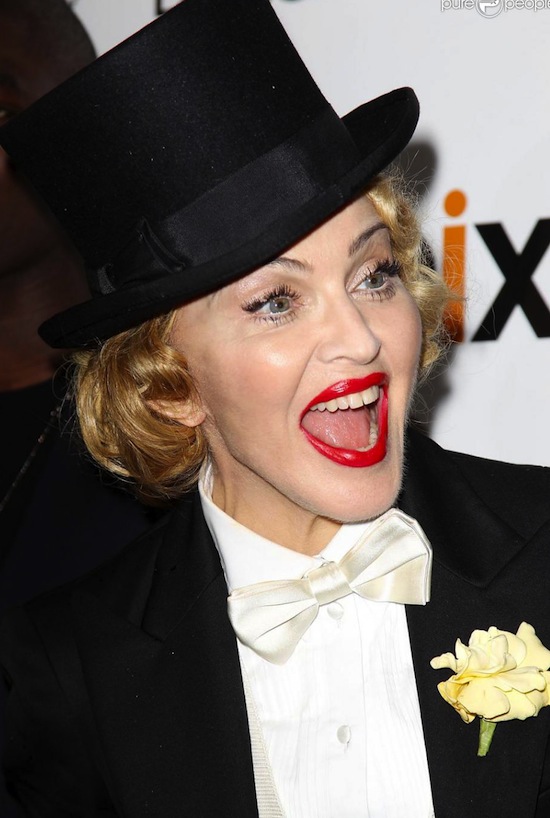 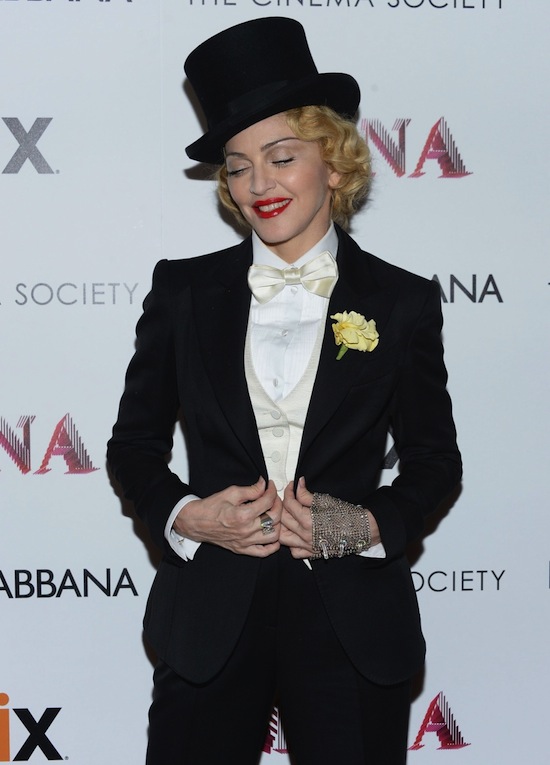 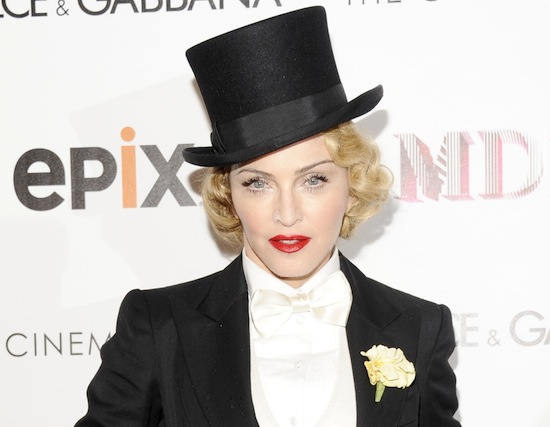 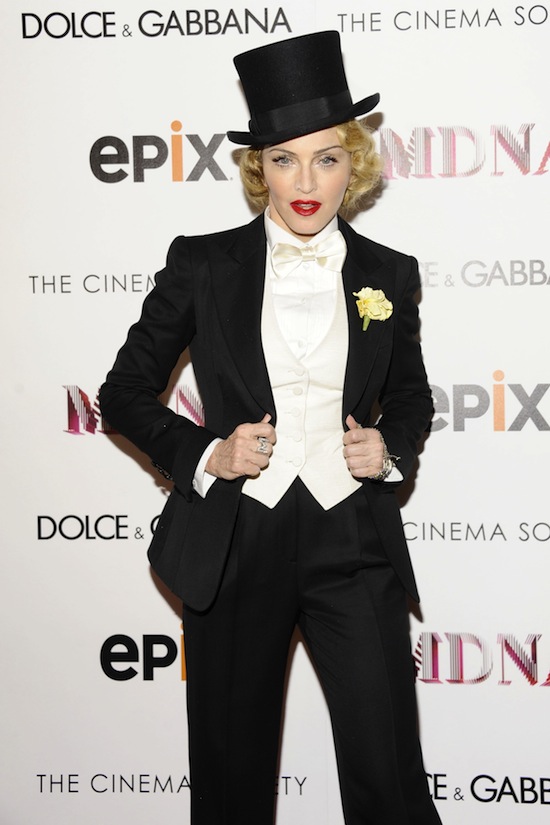 On June 18 2013, Madonna rocked a tuxedo while attending the premiere of her new film Madonna: The MDNA Tour held at the Paris Theatre in New York City.