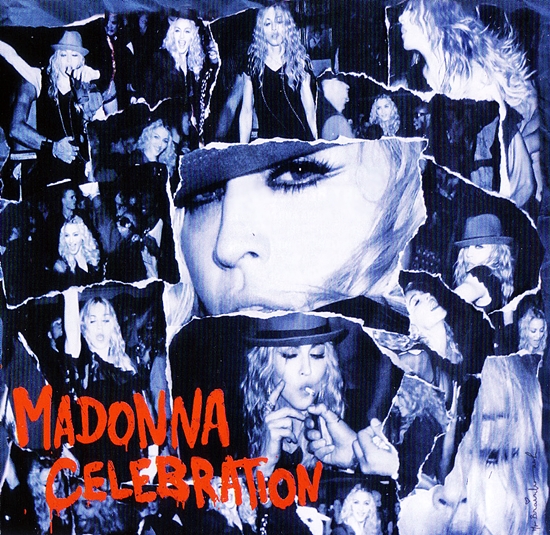 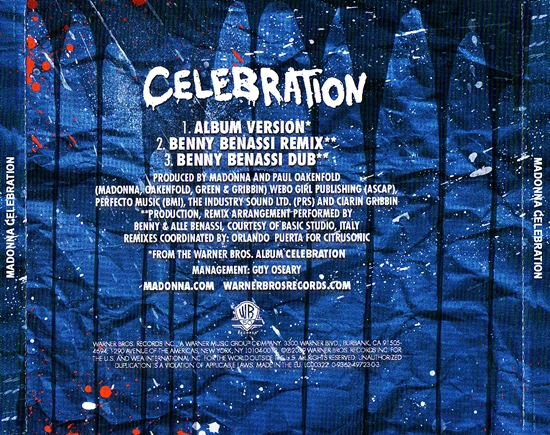 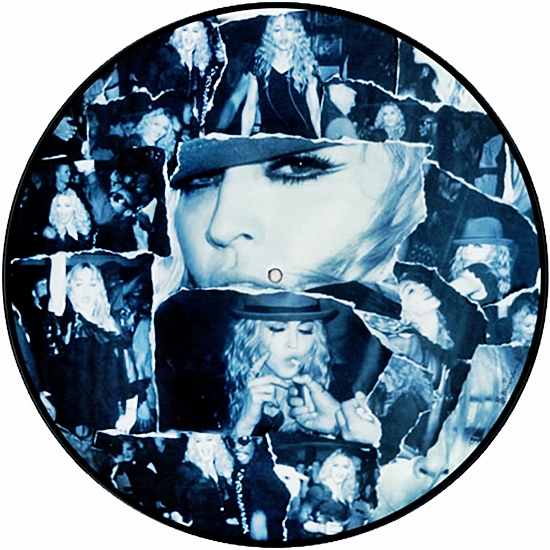 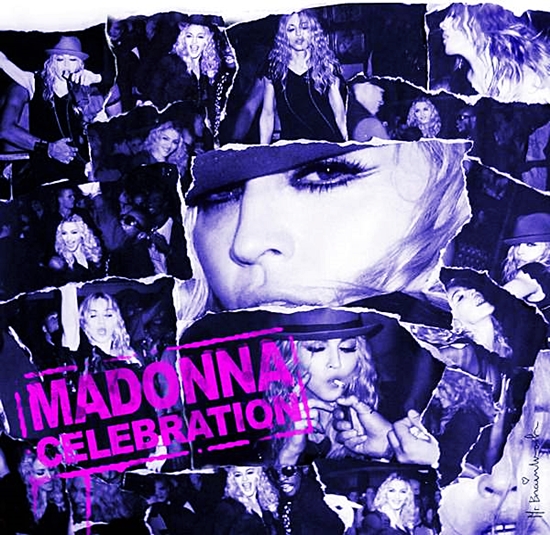 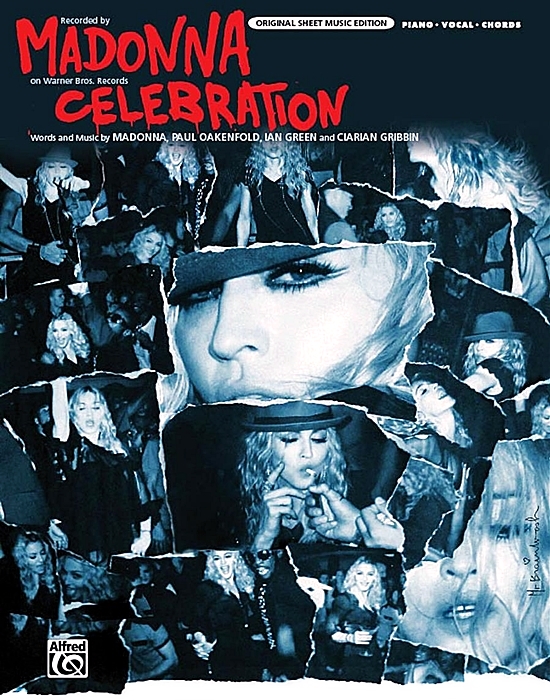 On July 31 2009, Celebration – the lead single from Madonna’s third greatest hits album of the same name – was released to digital media outlets by Warner Bros. Records. The song was written by Madonna, Paul Oakenfold, Ian Green & Ciaran Gribbin and produced by Madonna & Oakenfold with additional production by Green.

Celebration was one of two new songs written with Oakenfold for the hits collection. The other new track, Broken, was left off the album but was later issued on 12-inch coloured vinyl as an exclusive gift to members of Madonna’s official fan club. Oakenfold also contributed new production to It’s So Cool, an outtake from Madonna’s 2003 album American Life which was used as a bonus track for the deluxe digital download edition of the Celebration album. 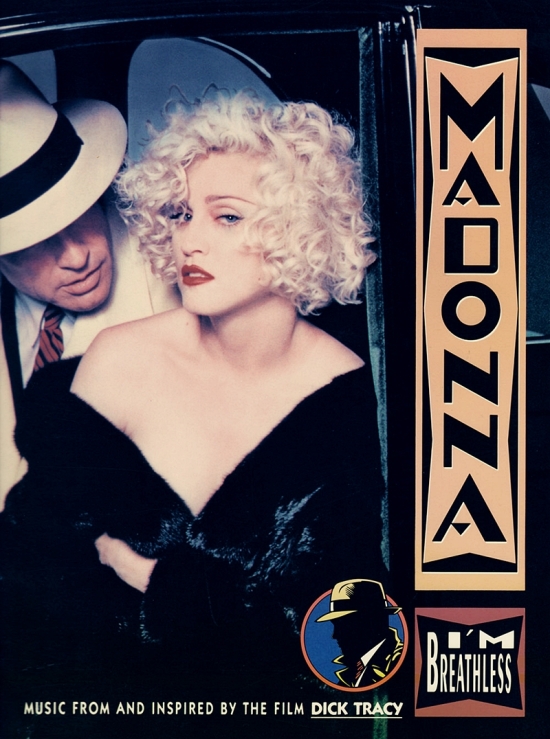 On July 30 1990, Madonna’s I’m Breathless album was certified double platinum (for shipment of two million units) in the USA.

In a 1994 interview with Q magazine, Madonna professed a particular fondness for the album:

“I would have to say the favourite record that I’ve made is the soundtrack to Dick Tracy. I love every one of those songs.” 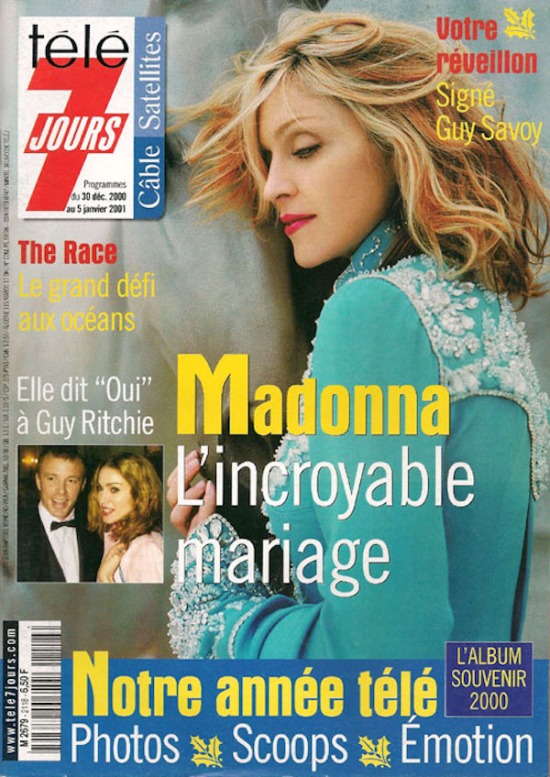 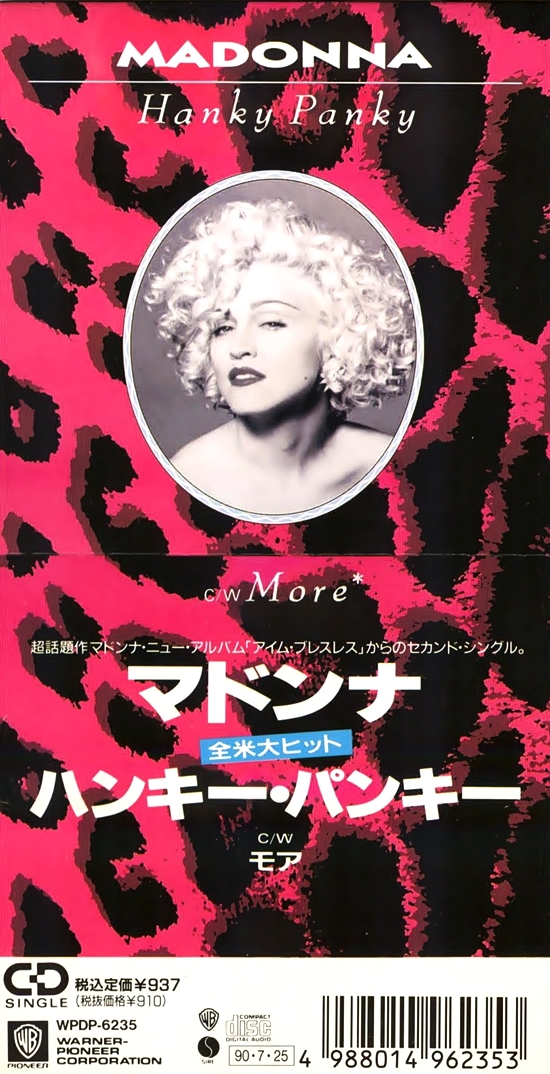 The rarely seen official video for Hanky Panky was recorded at the May 27th 1990 concert in Toronto, Canada. Rather than use live audio from the tour, Warner opted to overdub the live performance with the album version. The video was broadcast for a few weeks and then withdrawn from rotation in most countries. Although no official reason was given, it is assumed that due to the low-budget nature of the video, it was only ever intended to serve as an initial promotional push for the song, with its subsequent withdrawal from rotation being part of the plan.

Like Loading...
July 27, 2018 By Jay in 1983, July Tags: Borderline, Burning Up, Everybody, Holiday, I Know It, Jellybean Benitez, Lucky Star, Mark Kamins, Physical Attraction, Reggie Lucas, The First Album, Think Of Me 1 Comment 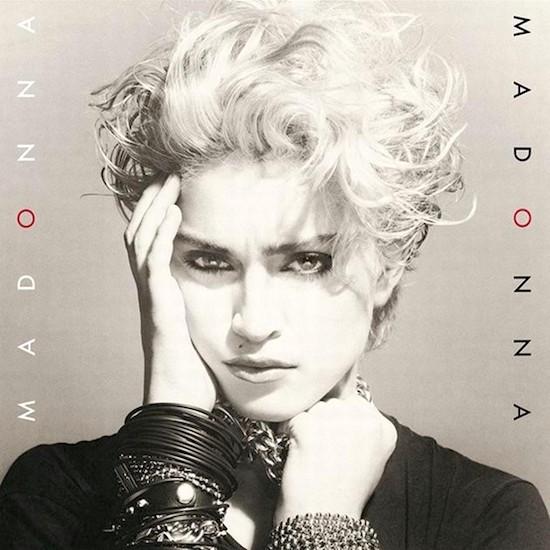 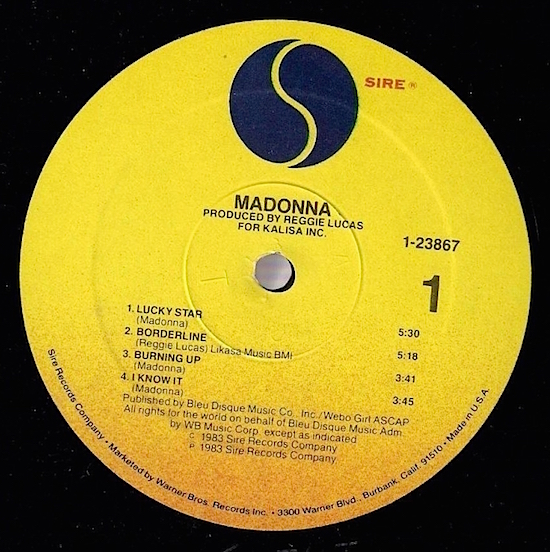 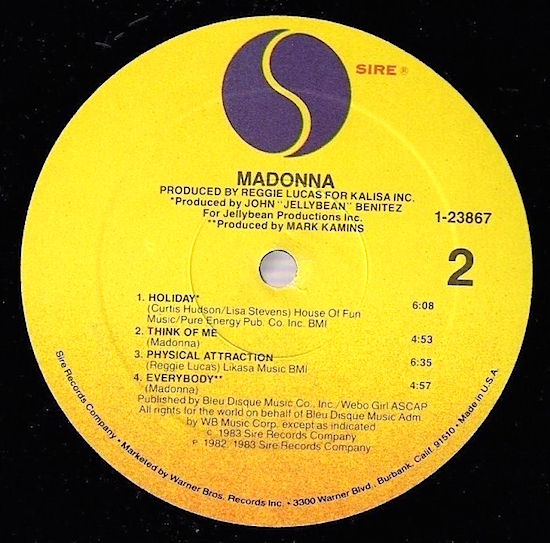 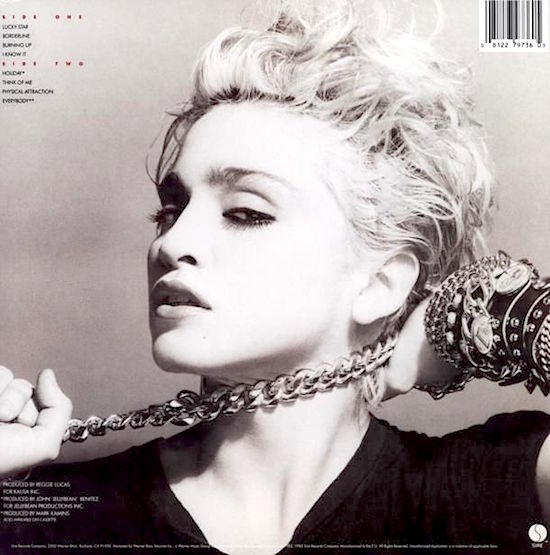 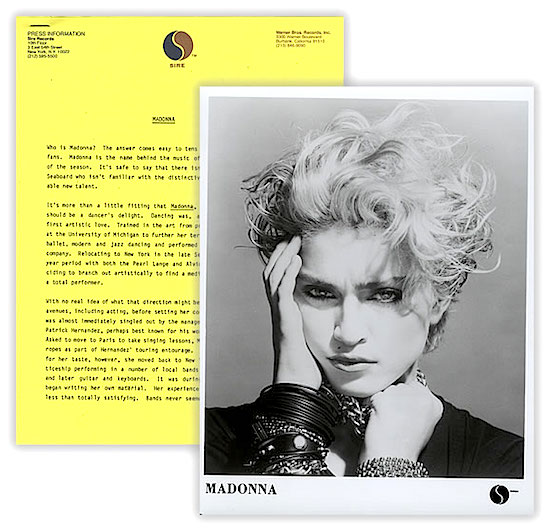 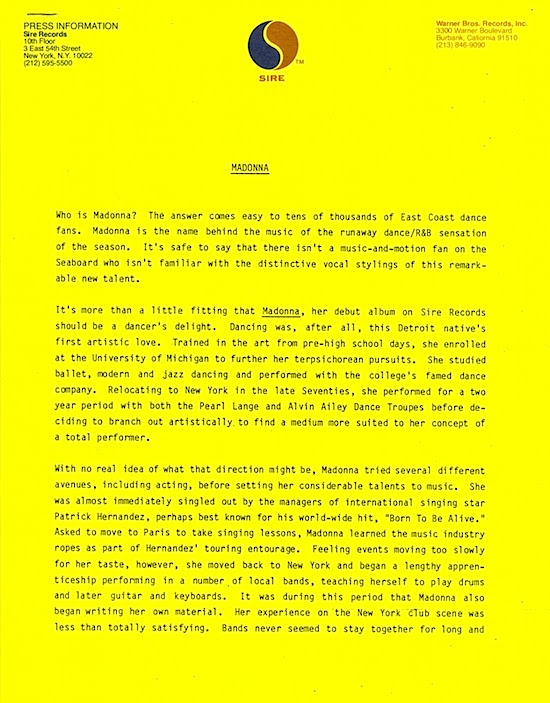 On July 27 1983, Madonna’s eponymous debut album was released by Sire Records. The record was renamed Madonna: The First Album for the 1985 international re-release of the album.

The album was released with 8 tracks (produced by John “Jellybean” Benitez, Mark Kamins and Reggie Lucas):

Five singles were released from The First Album:

“Madonna was unhappy with the whole album, so I went in and sweetened up a lot of music for her, adding some guitars to ‘Lucky Star’, some voices, some magic… I just wanted to do the best job I could do for her. When we would playback ‘Holiday’ or ‘Lucky Star’, you could see that she was overwhelmed by how great it all sounded. You wanted to help her, you know? As much as she could be a bitch, when you were in a groove with her, it was very cool, very creative.”

— John “Jellybean” Benitez talking about Madonna and the album.

“I’ve refrained over the years in addressing aspects of Madonna’s career because I’m not a person who likes negative discussions. But what I will say is that in Madonna’s ascent to fame and fortune, there’s been a pretty vicious competition for credit in being involved. In other words, someone will say, ‘I launched Madonna.’ If I talk to a lot of people today, I will say I was Madonna’s first producer. I produced six of the eight tracks on her first record. I would say nine times out of 10, their response will be, ‘Oh yeah, I thought Jellybean did that.’ But Jellybean didn’t do that. Jellybean was a remixer, and we didn’t have time to remix records. It wasn’t something that I was interested in doing. Somewhere in this process of publicists and personal relationships, somehow he came out as the guy. Just for the record, one tires in a lifetime of hearing someone taking credit for something that you’ve done. Jellybean produced ‘Holiday’ and he remixed a couple of tracks, but remixing tracks for radio isn’t the same thing as producing one of the major breakout pop stars of the 1980s…it’s almost like I was fired or something. I wasn’t fired. I finished the record…and they put it out and sold a bunch of records. And everybody else ran around trying to take credit for it because it was so big that they couldn’t help themselves. … I must say, Madonna was great to work with in the studio. She really put in the work. She was a creative person.” 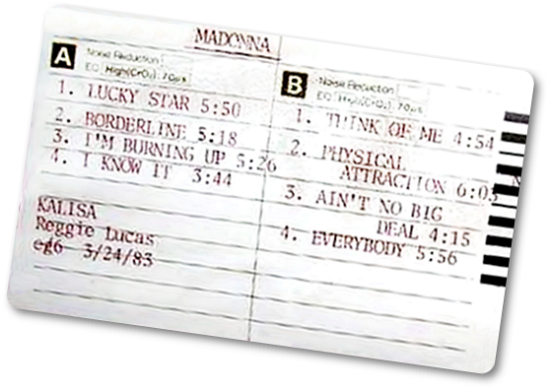 Although its authenticity is unconfirmed, this is said to be an early track list of the album. 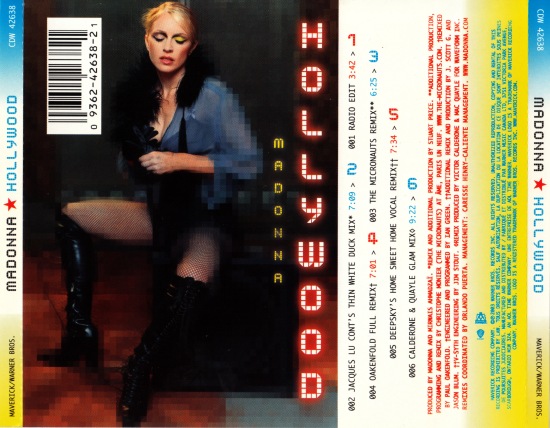 After an initial five-week run at the top, the single began its descent only to return to #1 for an additional two weeks following Madonna’s performance of Hollywood/Like A Virgin at the MTV Video Music Awards, which incorporated Stuart Price’s remix of Hollywood (released under one of his many pseudonyms, Jacques Lu Cont) and spurred renewed interest in the maxi-single. 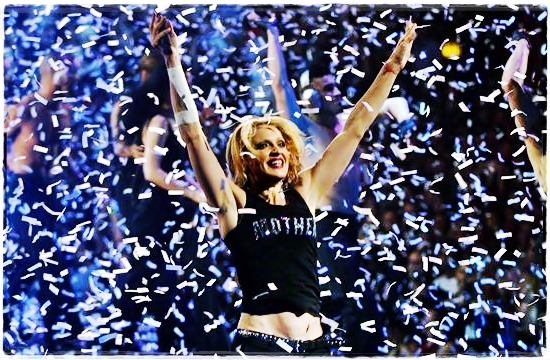 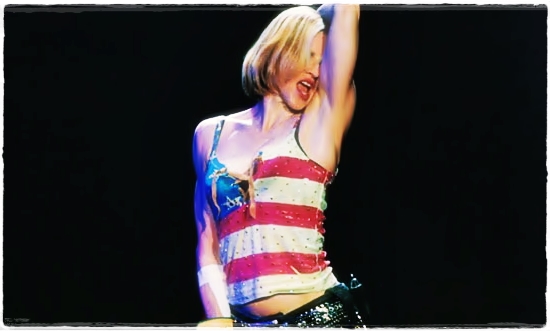 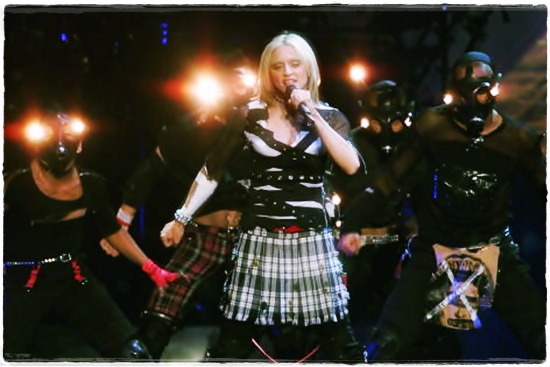