On December 21 2014, Madonna hit #1 on iTunes in 36 countries around the world with the release of six songs from her forthcoming album, Rebel Heart. In virtually every country the songs were released, they held six of the ten slots on the iTunes Top 10 chart. In seven of those countries, she had multiple #1’s across various iTunes charts. The lead single Living for Love topped the iTunes chart in twenty counties.

News of the surprise drop came when Madonna posted a link on Instagram late the previous night announcing the release as “an early Christmas gift” to those who pre-ordered the album. Fans immediately went to iTunes and drove the songs to the top of iTunes charts around the globe. Instantaneously Rebel Heart exploded on social media with the album topping the Billboard Trending 140 chart.

The early release of six songs from Rebel Heart came on the heels of a series of leaks which forced Madonna and her team to quickly devise a new marketing plan for the album. 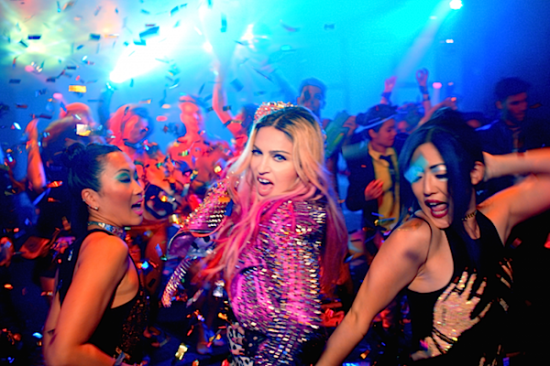 The video was shot in New York City at the Standard Hotel and was directed by long-time fan-favourite director, Jonas Åkerlund.

Jonas explained how the video evolved:

Madonna called me about Ghosttown. We hadn’t worked for a while because of different circumstances so when I heard all the songs Rebel Heart, I was very excited about Ghosttown. I connected to it creatively. And, yeah, we enjoyed working together. I was supposed to start something else right after and that got pushed and she asked me to do Bitch I’m Madonna. I saw it being so completely different from Ghosttown, something a little bit less serious, just fun and crazy.

On December 20 2014, this press release was sent to media announcing an early Christmas gift from Madonna, the release of six songs from Rebel Heart, a response answer to the leaked (and unfinished) tracks from the album expected in March 2015.

Madonna has just released six songs from her new studio album Rebel Heart. The six songs are currently available for purchase now via preorder at iTunes and other music outlets with purchase of the album and a la carte as well. The music will also be available on all streaming services. Additional music will be released on Feb. 9th. The full album of Rebel Heart on Interscope Records is scheduled to be released the first week in March 2015.

Song titles that are currently available from the new album are Living For Love, Devil Pray, Ghosttown, Unapologetic Bitch, Illuminati and Bitch I’m Madonna which was recorded with Nicki Minaj. Producers include Madonna, Diplo, Kanye West, Billboard, was recorded in NY, LA and London.

The decision to release the songs much earlier than anticipated was due to the leaking of several work-in-progress demos earlier this week.

“I was hoping to release my new single Living For Love on Valentine’s Day with the rest of the album coming in the Spring. I would prefer my fans to hear completed versions of some of the songs instead of the incomplete tracks that are circulating. Please consider these six songs as an early Christmas gift,” commented Madonna.

On July 4 2015, Madonna’s third single off of Rebel Heart, Bitch I’m Madonna, was the Hot Shot Debut at #26 on Billboard’s Dance Club Songs Chart in the USA.

Not bad for an irrelevant aging has-been! 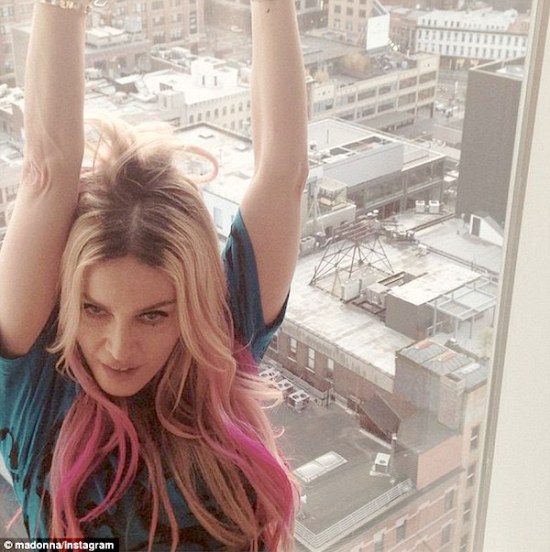 On May 15 2015, Madonna introduced her pink hair tips from the set of the Bitch I’m Madonna music video. 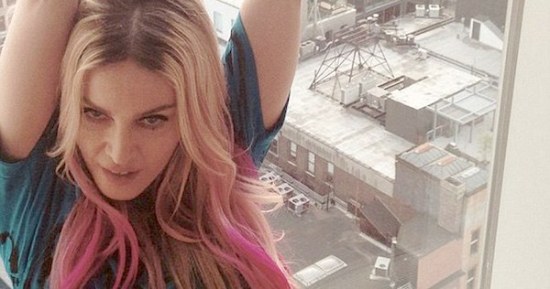 On January 29 2015, Rob Sheffield reviewed Madonna’s Unapologetic Bitch for Rolling Stone magazine’s singles review section (even though it was never released as a single):

Bitch, she’s Madonna. The queen of queens has given a taste of her upcoming album, Rebel Heart, with a few songs dropped in advance after an early leak of unfinished versions. And the girl’s in a feisty mood these days – Madonna writing herself a theme song called “Unapologetic Bitch” is like Springsteen doing one called “Jersey Guy Who Sweats a Lot.” These new songs range from the Nicki Minaj collabo “Bitch I’m Madonna” to the gospel-house pieties of “Living for Love” to the Yeezus-style industrial Kanye grind “Illuminati.” But “Unapologetic Bitch” is the standout: a breakup rant over a Diplo-produced dancehall groove, with Madonna shooting a few poison arrows into the heart of some dude who’s done her wrong. 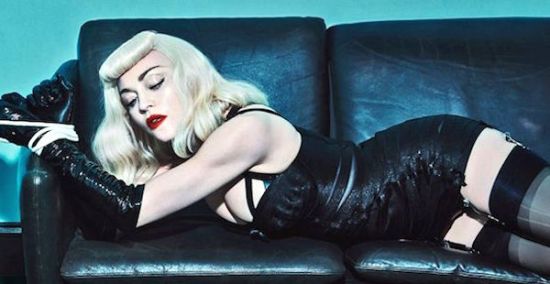