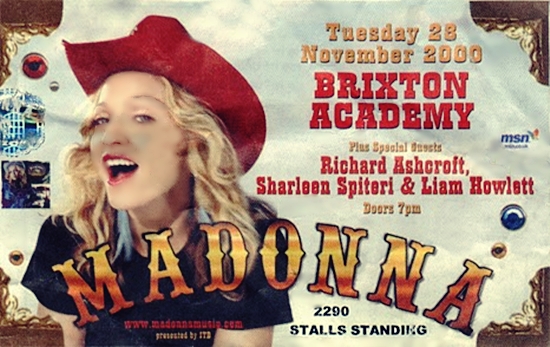 On November 28 2000, Madonna performed a mini-set at London’s Brixton Academy. The show was part of the Don’t Tell Me Promo Tour, which began only two months after the birth of her second child, Rocco, and consisted of a few small club dates as well as television performances and interviews to promote the second single from her Music album. Aside from the promotional aspect, Madonna also used the club shows as an opportunity to test the waters for performing live shows again following a seven-year hiatus from touring. The Brixton gig closely mirrored her set at New York’s Roseland Ballroom several weeks earlier, with one notable exception being the addition of Holiday to the UK set-list.

The full London set-list consisted of:

The Brixton Academy performance was streamed live across the internet to an estimated 9 million viewers.