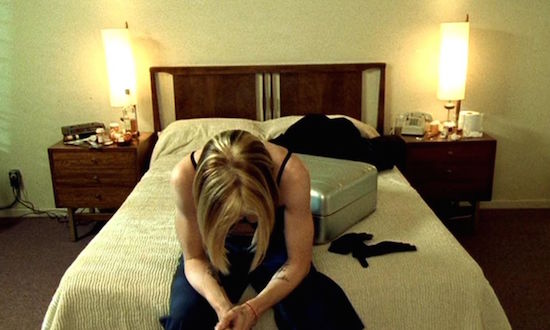 On March 22 2001, Madonna’s What It Feels Like For A Girl music video premiered.

The video was directed by Madonna’s then-husband, Guy Ritchie, and was deemed to be “Too Hot for TV” by MTV and VH1 because the video depicted gunplay, assault and suicide.

MTV released this statement about the video and their decision to ban it:

It’s been some time since Madonna ruffled the feathers of MTV or VH1 execs with a controversial video — perhaps not since 1992’s Erotica clip — so just under a decade later, the first lady of shock pop is out to prove she can still make ’em sweat.

Unlike the steamy segments of Erotica, 1990’s Justify My Love, and the one that started it all, Like a Prayer, it’s not the sexual content of What It Feels Like for a Girl that raises the red flag, it’s the violence — a concerted no-no in the post-Columbine, and more recently post-Santana, decision-making process.

The music in the video, it should be noted, is a dance remix of the version found on Madonna’s latest album, Music. The album cut will serve as the LP’s third single.

Directed by her husband, British filmmaker Guy Ritchie (Snatch, Lock, Stock and Two Smoking Barrels), the clip depicts gunplay, violent assault and suicide — elements MTV and VH1 prohibit in any videos they air. In it, the pop diva portrays a self-described “nihilistic pissed-off chick” who cruises around town inflicting damage on any man that crosses her path.
After picking up Grandma at the “Ol Kuntz Guest Home,” Madonna crashes into a car full of men who wink at her, threatens male police officers with a squirt gun before sideswiping their vehicle, and mugs a man at an ATM with a stun gun before wrapping her stolen car around a lamppost in what appears to be an intentional act.

The video “shows my character acting out a fantasy and doing things girls are not allowed to do,” Madonna said in a written statement distributed by her record label, Warner Bros. “This is an angry song and I wanted a matching visual with an edgy dance mix.”
Although What It Feels Like for a Girl won’t be added to the music channel’s regular rotation, MTV and VH1 will air the clip just once.