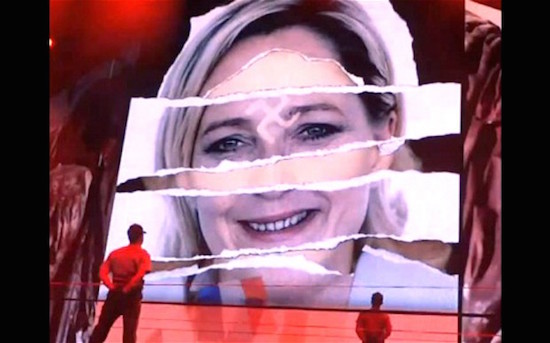 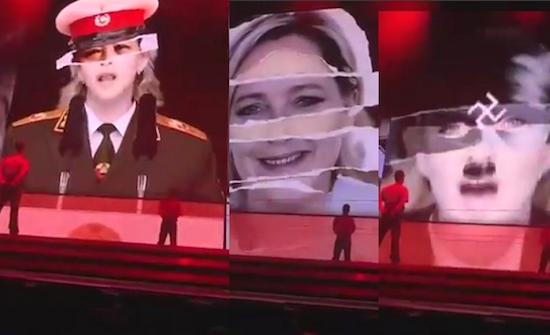 On June 3 2012, Marine Le Pen threatened to sue Madonna if she included her image with a swastika during her shows in France.

Here’s a snippet of an article that appeared in the Telegraph:

The fleeting image was shown at a concert the US-born singer gave in Tel Aviv last Thursday as part of her MDNA World Tour.

Projected during the song Nobody Knows Me, the film morphed Madonna’s face with a number of famous figures, including Chinese leader Hu Jinatao, US Republican former presidential candidate Sarah Palin and Pope Benedict XVI.

Miss Le Pen’s eyes and forehead then appear for a second before a swastika and the eyes of Adolf Hitler are superimposed onto the FN leader.

Furious, Miss Le Pen threatened to sue the singer if she kept the video unchanged when she performs in Paris on the July 14 national holiday and in Nice in August. “If she does that in France, we’ll be waiting for her,” she told Le Parisien.

Hitting back at Madonna, she was quoted by the newspaper as asking: “By the way, has Madonna given back the children she stole from Africa? Or did she end up buying them?”