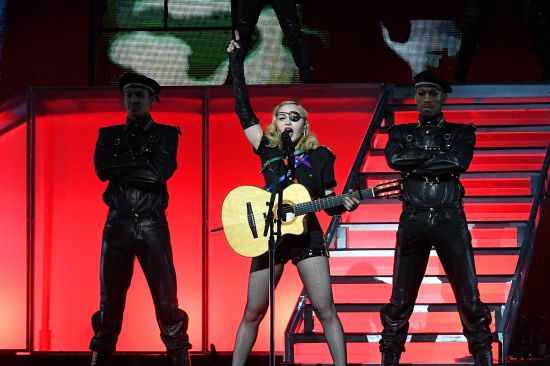 Madonna opened with her Harlem ballroom scene-indebted smash Vogue and the audience response was deafening. After that, the musical shapeshifter brought out a single it’s safe to say no one expected to hear as part of a limited-length set: American Life. That being said, while it’s not one of her, say, 20 most renowned songs, the message of American Life has only grown more timely in the 16 years since its release, and its strangely compelling melange of squelching synths, strings and folk had the crowd rapt — especially when she dove head-first into the “soy latte” rap (which reals Stans in the crowd parroted back to her perfectly).

Midway through her wind-whipped set, Madge spoke to the historicity of the moment and the significance to her life. “Fifty years, people,” Madonna said. “Fifty years of freedom fighting. Fifty years of putting up with discrimination, hatred and intemperance. Fifty years of blood, sweat and tears. Fifty years of not bowing down to fear. We have been on this journey together, and I am so proud and honored to share this historical evening with you.”

Before returning to performing, she shouted-out her early NYC days. “You really don’t know. Since I came to New York as a wee little girl, I have always been embraced by queer nation. I always felt like an outsider but you made me feel like an insider. You must know how much I love and appreciate everyone here tonight.”

After that, the cops busted in — well, at least the police-themed dancers Madonna employs. They helped her create a visually powerful live performance of her Madame X highlight God Control, replete with detailed choreography and a disco groove that had the crowd gyrating and shimmying. She closed with I Rise, a powerful anthem for both gun control and LGBTQ rights, after which fireworks exploded over Pride Island as starry-eyed attendees headed home.