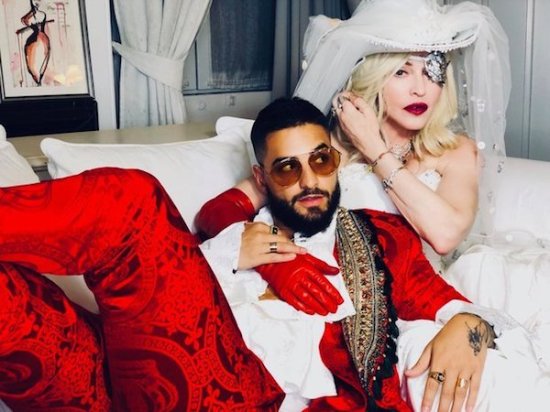 World, meet Madame X, a persona created by Madonna for her upcoming 14th studio album. The alter ego made her grand debut on Wednesday when the 60-year-old pop star dropped a collaborative single titled Medellín, featuring 25-year-old Colombian singer Maluma. The summery bop, which is Madonna’s first new single since 2015, combines both English and Spanish lyrics with easy-going Reggaeton beats as the two artists reflect on their pasts and imagine a trip to the Colombian city where Maluma was born. Madonna opens the song by singing, “I took a pill and had a dream. I went back to my 17th year. Allowed myself to be naïve . . . to be someone I’ve never been. I took a sip and had a dream . . . And I woke up in Medellín.”

Madonna and Maluma may seem like a random pairing at first, but the two actually met backstage at the 2018 MTV VMAs, where they hit it off and planned to team up on music afterward. Madonna’s entire Madame X album will debut on June 14, and the Medellín music video will be released on April 24. Watch a sneak peek clip below to catch an intriguing glimpse at Madonna — er, Madame X — and Maluma cha cha-ing to the beat for the video.

Follow Today In Madonna History on WordPress.com
Join 15,257 other followers