On July 17 1993, Rain was released as a single in North America. It was the fourth and final North American single from the Erotica album.

Following a cold reception to Madonna’s previous North American single – the bleak-but-beautiful Bad Girl – Rain was given a glossy makeover by French record producer Daniel Abraham to help ensure that it would receive a warmer welcome from radio programmers. The U.S. promotional CD that was serviced to radio by Maverick/Warner offered the choice between the sweetened “Radio Remix” (in full-length and edited form) or an edited album version, which was fittingly used in the song’s gorgeous music video. As her label had correctly predicted, radio indeed favored the smoother sound of the “Radio Remix” over the darker, more dynamic (and in our opinion – more interesting) production-work of the original mix. While not an all-out smash hit, Rain was the first single from the Erotica album to impact Billboard’s Hot AC chart, where it reached the Top 10, and it is generally viewed as an initial recovery step following the backlash Madonna had faced in the wake of the Sex book.

Written and produced by Madonna & Shep Pettibone (unlike the majority of the tracks from Erotica, Tony Shimkin has not been added as co-writer, according to the Warner-Chappel publishing database), Rain was one of the earliest songs conceived during the Erotica album sessions. It appears as the first track on a two-cassette collection of demos from the album sessions submitted to the U.S. Library Of Congress for copyright registration. The infamously sought-after set is often referred to by fans as The Rain Tapes because of the song’s prominent placement in its sequencing and also due to the likely unintentional visual prominence of the song’s title in the handwritten sleeve notes that accompanied the tapes. 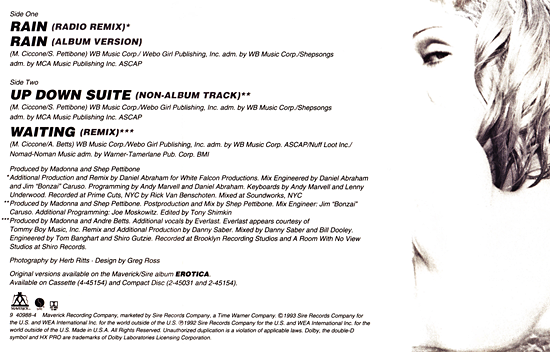 The Rain maxi-single was perhaps most notable for its inclusion of a non-album track, Up Down Suite, which was for all intents and purposes a dub remix of album outtake, Goodbye To Innocence (which remained unreleased at the time, aside from some vocal samples used in a promo-only remix of Fever). A new remix (featuring Everlast) of the album track, Waiting, was also included on the North American maxi-single, while its original album version served as the single’s North American b-side.

With its poetically poignant and emotionally charged lyrics, percussive urgency and one of Madonna’s most ambitious uses of layered self-harmonization (not to mention it being accompanied by one of the most beautiful music videos ever created), it isn’t difficult to understand why Rain remains such an enduring fan favorite.

Waiting is the hardest thing
I tell myself that if I believe in you
In the dream of you
With all my heart and all my soul
That by sheer force of will
I will raise you from the ground
And without a sound you’ll appear
And surrender to me, to love”