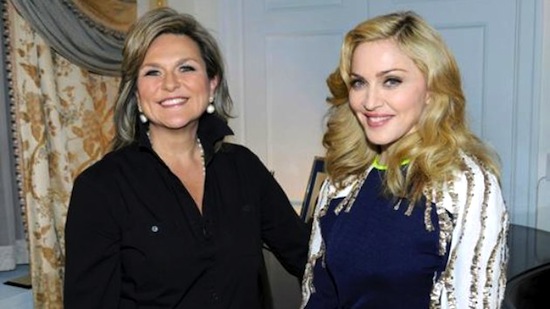 On January 12 2012, Cynthia McFadden asked Madonna, during a Good Morning America interview, for her opinion of the Lady Gaga song, Born This Way.

McFadden started by asking if Madonna felt that Lady Gaga was “copying” her. Madonna’s first reply was complimentary.  She called Gaga “a very talented artist” and said she admired her songwriting abilities.

Madonna went on to say, “I certainly think she references me a lot in her work. And sometimes I think it’s amusing and flattering and well done.”

Madonna said that Gaga’s work also appeared to be a “statement about taking something that was in the Zeitgeist, you know, 20 years ago and turning it inside out and reinterpreting it.”

Madonna continued, “There’s a lot of ways to look at it. I can’t really be annoyed by it …because, obviously, I’ve influenced her.”

But Madonna became coy when the conversation turned to Born This Way.

“When I heard it on the radio …I said ….that sounds very familiar.  It felt reductive.”

Pressed as to whether that was a good or bad thing, Madonna told Cynthia to “look it up”  – before smiling slyly and taking a sip from her tea cup.