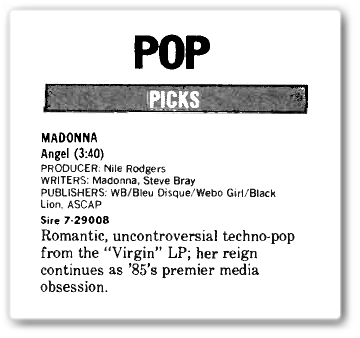 On April 27 1985, Madonna’s Angel single was briefly reviewed in Billboard magazine as it entered the Hot 100 at #48.

The Angel 12-inch single would be issued commercially in North America in late May. It included an extended dance mix of the titular track, but let’s be real, people bought it for Into The Groove on the flip – it being the only North American home for the classic dance floor gem until a remixed version appeared on You Can Dance in 87. In Canada, young cassette-loving buyers’ interest in the b-side prompted Warner Canada to issue the first Madonna cassette maxi-single, as the format would eventually be known.