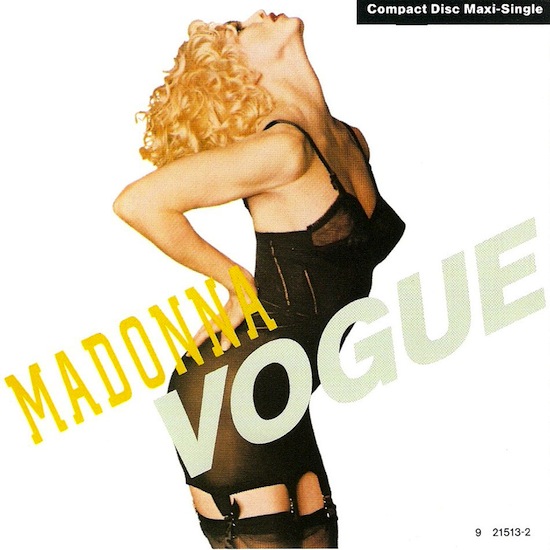 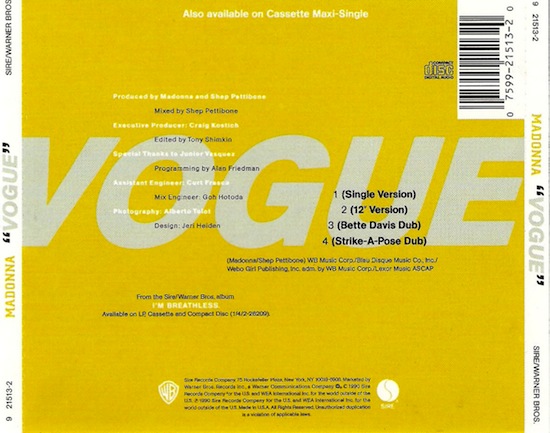 Here is the allmusic.com review of the maxi single:

Vogue, the first single from Madonna’s Dick Tracy-inspired 1990 album I’m Breathless, was arguably one of her crowning artistic achievements (both song-wise and video-wise), one of the biggest all-time house music hits (spending three weeks atop the U.S. pop charts), and her second proper U.S. maxi-single release. The single includes four versions: the single version, the 12″ version, the Bette Davis Dub, and the Strike-A-Pose Dub. The song’s most definitive version, that being the album/video version, is not on the single. The single version, where she asks “what are you looking at,” begins with drumbeats and goes straight into the song, as opposed to the album version’s minute-long introduction. Besides the different intros, however, the rest is the same. The 12″ version is, naturally, quite longer, and just as good. The “Bette Davis Dub” begins with the extended album intro, but, save for the chorus and the “rap,” is virtually instrumental, as is the last mix, which cleverly uses samples from Like a Virgin. This disc’s main selling point is the fact that it’s a collection piece, and for collectors and diehards, it’s nice to have the single edit and 12″ mix. But if one is a casual fan, go with the album version.