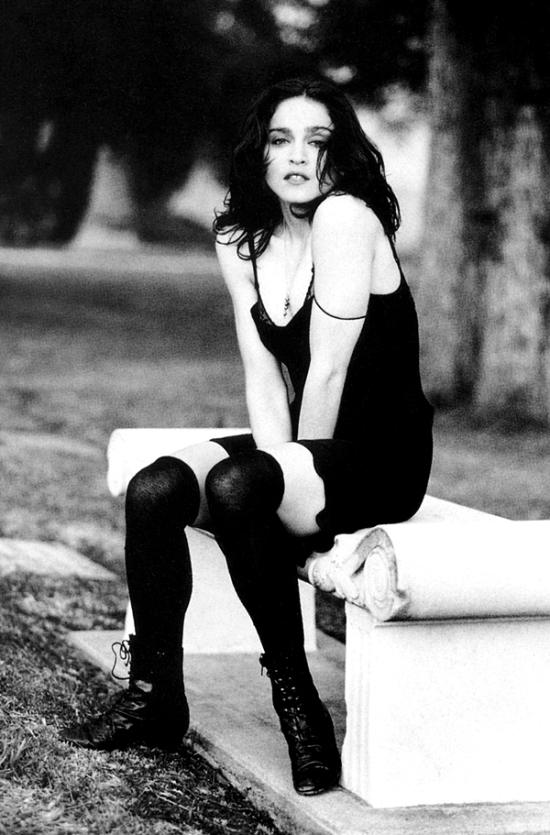 On March 19 1989, Madonna was the featured artist in the Arts section of the New York Times in an article and interview by Stephen Holden.

Like a Prayer, said Madonna, “is the song of a passionate young girl so in love with God that it is almost as though He were the male figure in her life. From around 8 to 12 years old, I had the same feelings. I really wanted to be a nun.”

What follows is a description in Madonna’s own words of what happens in the video:

“A girl on the street witnesses an assault on a young woman. Afraid to get involved because she might get hurt, she is frozen in fear. A black man walking down the street also sees the incident and decides to help the woman. But just then, the police arrive and arrest him. As they take him away, she looks up and sees one of the gang members who assaulted the girl. He gives her a look that says she’ll be dead if she tells. The girl runs, not knowing where to go until she sees a church. She goes in and sees a saint in a cage who looks very much like the black man on the street, and says a prayer to help her make the right decision. He seems to be crying, but she is not sure. She lies down on a pew and falls into a dream in which she begins to tumble in space with no one to break her fall. Suddenly she is caught by a woman who represents earth and emotional strength and who tosses her back up and tells her to do the right thing. Still dreaming, she returns to the saint, and her religious and erotic feelings begin to stir. The saint becomes a man. She picks up a knife and cuts her hands. That’s the guilt in Catholicism that if you do something that feels good you will be punished. As the choir sings, she reaches an orgasmic crescendo of sexual fulfillment intertwined with her love of God. She knows that nothing’s going to happen to her if she does what she believes is right. She wakes up, goes to the jail, tells the police the man is innocent, and he is freed. Then everybody takes a bow as if to say we all play a part in this little scenario.”